Businesses not only shape the identity of a city through their outward appearance, they always have been and still continue to be indispensable establishments providing convenient shopping, but also places to meet and communicate. The loss of a company of this kind is thus always also a disturbance in the social framework of the city, whose consequences and effects may become apparent very immediately or sometimes only in the long term.

For a number of years now, we have been forced to note the disappearance, transformation or repurposing of Vienna’s traditional businesses and their shopfronts. This is why, in 2009, we began our project “Shops with history – sundry goods in Vienna”: taking the form of a work in progress, it involves a continuous photographic documentation of the businesses that still exist. In 2018 we took things a step further by adding the comparative photographic study SPURENSUCHE, which deals with the changes that have taken place: old photographs of the businesses were juxtaposed with the new situations that had developed.

In Vienna, shopfront architecture has a long and remarkable tradition: Adolf Loos, Otto Wagner or Josef Hoffmann for earlier examples and Hans Hollein, Hermann Czech or Coop-Himmelblau for the later ones – to provide just a brief sampling. Their work has already been extensively discussed, acknowledged and documented. Our interest is not so much in such classics of shopfront design; instead, it is above all the ordinary shopfronts of traditional retail shops and small businesses and service providers that we wish to capture. They can be found in every district of Vienna and in all kinds of locations, and they often stick out among the shopfronts of the shifting businesses around them. Architecturally they are usually idiosyncratic and unique, but they are often of only minor historical or aesthetic interest.

We select the businesses on the basis of the individual design of their shopfronts, typographically interesting lettering, their area of business, the design of their window displays or their unusual selection of goods. Through a focus on uniformly framed views, freed as much as possible from any distracting elements of their surroundings, we additionally seek to generate a serial character in the images, which provides the extremely diverse shopfronts with an equal force of presence.

We understand our work in terms of snapshots of these characteristic urban features caught in a process of rapid change. We have now captured over 500 businesses, and more than half of these photographs can already be seen here in our online gallery.

We have been carrying out city walks on this topic since 2016. Based on our photographs, we seek out districts and streets where it is possible to find an interesting mix of different businesses and service providers. What is interesting is not just their shopfronts and displays and the form of presenting goods that go with them, but also the photographically documented changes in individual businesses. Beyond this, we also go inside selected shops, whose owners tell us more about the history of these businesses and their own stories. Through these walks, the photographic project has taken on another dimension for us. Together with our groups, we listen intently as we are provided with insights into the tradition or craft of the shops and businesses in the form of “oral history”.

In the context of the Jane’s Walk Festival and the city expeditions organised by the Wien Museum, we have already organised numerous city walks in the following streets in Vienna: Wollzeile, Wiedner Hauptstraße and Schleifmühlgasse, Neubaugasse and Kirchengasse, Josefstädterstraße. As part of the Vienna Art Book Fair 2019, we went on a city walk along the Landstraßer Hauptstraße.

In 2016 we also decided to remove the photographs from the virtual realm and to publish them in the form of a photobook series, each in a small edition of 150 hand-bound, numbered and signed copies.

The book blocks are produced using four-colour offset printing, while the protective cover and text pages will be printed digitally. In selecting a printer, it was important to us to find a Vienna-based company that also does its production here.

The books’ pages are sorted and the printer delivers them to us folded in their final format, and we then produce their sewn binding by hand. We attach a photograph commemorating a shop that no longer exists to the front cover of each copy.

Each volume is packed inside a protective cardboard cover and cellophane: their outer form is meant to correspond to their content. This is why we have designed their packaging using materials reminiscent of what was formerly used for shirts or socks.

The books of the series are listed in the VLB database of books in print, and they are distributed through select bookshops and online. Volumes 1–3 have already sold out. Volume 4 was presented in 2019, during the Vienna Art Book Fair, and Volume 5 was published in October 2021. We will be presenting it in Leipzig in March 2022 at the first ever Leipzig Photobook Festival.

In the autumn of 2018, we presented our exhibition “Spurensuche 2018” at the Viennese bookshop Lia Wolf Cabinett: that summer, preparing for the show, marked the first time we selected a group of images from our collection that featured businesses which no longer existed at that time. We sought out their locations and, in most cases, were able to photographically document the conditions we found there. The images of the old businesses were juxtaposed with the new situations; a period of two to six years separated the images being compared.
Lia Wolf Cabinett: SPURENSUCHE 2018

At FOTO WIEN 2019, we presented the accompanying photobook Spurensuche 2018 Geschäftsportale in Wien – Beobachtungen urbaner Veränderung (Spurensuche 2018: Shopfronts in Vienna – observations on urban change), which features the 22 pairings of images of shopfronts from the exhibition of the same name at Lia Wolf Cabinett.

In 2019 the NÖ-ART organisation invited us to participate in the exhibition “Was Fotografie kann” (What photography can do) with our photographs “Spurensuche 2018”. This show, curated by Herrmann Capor, was presented at four different locations in Lower Austria: Schüttkasten Allentsteig, Haus der Kunst Baden, Konzerthaus Weinviertel (Ziersdorf) and Gänserndorf town hall.
NOE ART: Was Fotografie kann 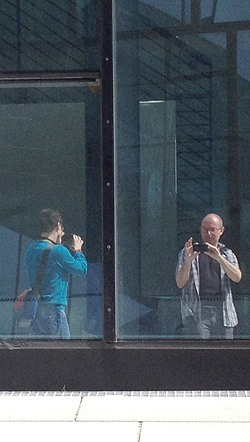 Interested in old structures and new architectures in Vienna and the world. For years a passionate photographer of the lettering of old shopfronts as well as street furniture related to all kinds of themes in Vienna.

From 2008 to 2010, the first collaborative project with Martin Frey: a photo documentary on Vienna’s Südbahnhof, the rail station torn down in 2010 in order to make room for the new Hauptbahnhof.

His photobook “Wiener Postbriefkästen” features 42 views of Viennese postboxes and was presented at the Vienna Art Book Fair in 2019. He discovered these finds along the way in Vienna and while exploring the city.

Realisation of a number of documentary photo projects, including those on markings related to Viennese cellars which had served as air-raid shelters (1992-2011) and on Vienna’s Südbahnhof (2008-2010, in collaboration with Philipp Graf)

In Budapest in 2017, together with Hanna Schimek, he realised the artistic and urban-research project “Budapest Windows – It’s all about shop windows – but also more…”, with exhibitions at the FUGA Budapest Center of Architecture and at two other locations.

In 2011, the first photographs were created for “Vienna windows – display in progress” – a photoblog on abandoned shopfront displays in Vienna, in collaboration with Hanna Schimek.

In 2009, he begins the long-term project “Döner macht schöner (with kebab you’ll need no make up)”, which explores changes in the appearance of Viennese (shopping) streets.

“The cheap-eaters” (2006–2008, in collaboration with Helmut Mörwald) was inspired by Thomas Bernhard’s novella of the same name. A hidden camera (a Nokia 6230i mobile phone)was used to create short photo stories about public canteens in Vienna and Berlin, some of which no longer exist.

This website uses cookies to improve your experience while you navigate through the website. Out of these, the cookies that are categorized as necessary are stored on your browser as they are essential for the working of basic functionalities of the website. We also use third-party cookies that help us analyze and understand how you use this website. These cookies will be stored in your browser only with your consent. You also have the option to opt-out of these cookies. But opting out of some of these cookies may affect your browsing experience.
Necessary immer aktiv
Necessary cookies are absolutely essential for the website to function properly. These cookies ensure basic functionalities and security features of the website, anonymously.
Functional
Functional cookies help to perform certain functionalities like sharing the content of the website on social media platforms, collect feedbacks, and other third-party features.
Performance
Performance cookies are used to understand and analyze the key performance indexes of the website which helps in delivering a better user experience for the visitors.
Analytics
Analytical cookies are used to understand how visitors interact with the website. These cookies help provide information on metrics the number of visitors, bounce rate, traffic source, etc.
Advertisement
Advertisement cookies are used to provide visitors with relevant ads and marketing campaigns. These cookies track visitors across websites and collect information to provide customized ads.
Others
Other uncategorized cookies are those that are being analyzed and have not been classified into a category as yet.
SPEICHERN & AKZEPTIEREN
Unterstützt von